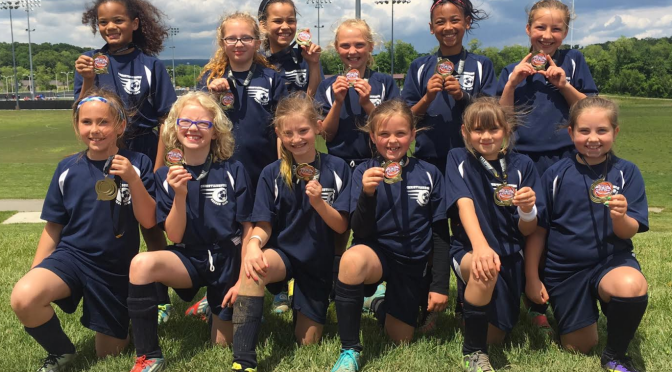 The CSC Blue Bombers won their division in the NRU National Bank Summer Kick-off Tournament played at Virginia Tech in Blacksburg VA, May 21 and 22.
They started off the tournament with a win against the CSC Blue Wave 5-3.  Their next game was against Johnson City Futbol JCFC.  This was a very physical game but the Bombers played tough and came through with another win 2-1.
On the second day of the tournament the Bombers faced NRU for their first game.  This was a tough one as the Bombers came up short with a loss 3-1.  Despite the loss the Bombers made in into the finals based on points and faced NRU one final time for the championship game.  This was arguably one of the CSC Blue Bombers best games of the season.  With a goal scored early by Taylor Allen the Bombers took the lead. Thanks to the strong goalie performance by Hannah Blankenship and strong defensive performance that was the only goal they needed.  However, Taylor Allen had one more in her and they clinched the lead 2-0 winning the final game against NRU and winning first place in the tournament.
Each player played a vital role in this win and it would not have been possible without the contribution of each and every girl on the team.
At this time I would like to recognize and congratulate all of the U10 Girls CSC Blue Bombers for their accomplishment:
Taylor Allen
Hannah Blankenship
Madison Boone
Kailyn Brawley
Kinley Brooks
Autumn English
Tatem Estes
Nesreen Kadiri
Ashton Lafon
Ava Landers
Logan Mundy
Eleanor Scardina

The Christiansburg Soccer Club is centered in Christiansburg, the heart of Virginia's New River Valley. We offer youth recreation and competitive soccer at an affordable cost.